General principles of this assessment 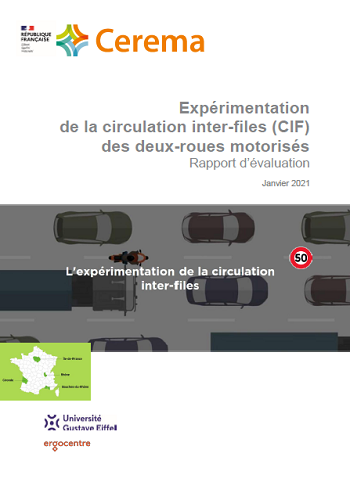 Inter-line traffic is characterised by the movement of motorised two-wheelers between the lines of vehicles located on the two lines, in the same direction of movement, to the leftmost of a roadway. It is possible on motorways and dual-carriageway roads separated by a central reservation and equipped with at least two lanes each, where the maximum authorised speed is greater than or equal to 70 km/h, when due to its density, traffic is established in uninterrupted lines on all the lanes other than those reserved, if necessary, for the circulation of certain specific categories of vehicles or users. The inter-line speed of motorised two-wheelers is limited to 50 km/h.

This legal definition of inter-line traffic leads to define its counterpart, inter-line overtaking (ILO), which is complementary to ILT, or in other words the failure to observe a rule relating to ILT.

The assessment method was deployed around four themes: Behaviours, accidentality, acceptability and training.

With regard to behaviour and accidentality, the method is based on the principle of a "before" and "after" assessment for the motorway network of the eight departments of the Île-de-France Region, and of the Bouches-du-Rhône, Gironde and Rhône departments. The Haute-Garonne department was selected as a "control zone". Moreover, the accident assessment of motorised two-wheelers in ILT or ILO was compared to the changes in accidentality of motorised two-wheelers on the network eligible for ILT of each of the departments, as well as to changes in M2W accidents for all road networks in each department in order to take into account any contextual effects.

With regard to acceptability, 3 waves of surveys were directed towards drivers of motorcar drivers and motorised two-wheeler riders in order to collect their statements regarding the experiment.

Finally, two surveys were carried out regarding the teaching of ILT, one among people taking their motorised two-wheeler license or the driver's license, the other among instructors, using the declarations to obtain a snapshot of the processes in progress.

A favourable development in M2W behaviour, particularly in terms of speed, but which remains in the minority in relation to compliance with the rules.

The main results of the assessment indicate that the experimentation has had positive effects on behaviour overall. Although remaining in the minority, the combined respect for positioning and speed rules tended to improve during the experiment, in particular on the Paris ring road.

A severity which remains low, but a number of accidents which increases slightly with, however, a significant increase in Gironde.

M2W accidents have decreased by 10% throughout France between the initial state (2012-2014) and the experimentation years (2016-2018). The accident rate of M2Ws on the scale of all experimental areas (entire departments) also fell by 10%, while it increased by 12% in the scope of «road networks where the experimental ILT applies» and of the control zone, stabilising during the experiment.

4,500 M2W accident reports on the experimental networks were analysed over the 2015-2018 period (one year before the experiment, 3 years after) in order to determine the mechanisms of each accident involving a M2W. The cumulative total of accidents in which M2Ws were practising ILT or ILO are of the order of 1,650 minor accidents, 161 serious accidents and 16 fatal accidents. For the 16 fatal M2W accidents, none conformed to the rules of the ILT experiment: speed or positioning - most often the speed was much greater than the limit of 50 km/h.

The accident factors involving a M2W in an ILT or ILO situation mainly concern excessive or unsuitable speed for M2W riders, combined with an unexpected lane change or failure to observe the rules of the highway code by non-M2W users.

Knowledge of the rules that can be improved.

Light vehicle drivers declare good acceptance of the rules of the experiment. Changes in riding behaviours of M2W riders have been declared over the years (search for user gaze, use of lights).

A slight effect on learning to drive

It also emerges that ILT was discussed more frequently in 2016 at driving schools in the experimental areas than in the rest of the region. The experiment therefore served to reinforce teaching, though there is room for further progress.

Ultimately, an experiment that failed to provide clear results.

This assessment highlighted the need to better control driving rules, to better communicate and teach the practice. Finally, the development of reserved lanes (right-hand lane, left-hand lane, etc.) in the near future requires clarification of the rules of ILT practice in their presence.