Friches
urbanisme
Cartofriches
aménagement
renouvellement urbain
cartographie
CC0
"Cartofriches" is a new app designed to inventory brownfield sites (industrial, commercial, and housing…). Launched online by Cerema at the request of the French Ministry for the Ecological Transition, its aim is to help local authorities and all kinds of project owners reuse these sites, and in doing so, to help limit the artificialization of soil.

The new app, presented to the Ecological Defence Council on 27 July 2020, works towards the goal of net zero artificialization, while almost 24,000 hectares of natural and agricultural soils are developed every year. This has a great many consequences, particularly in terms of biodiversity and regional adaptation to climate change. 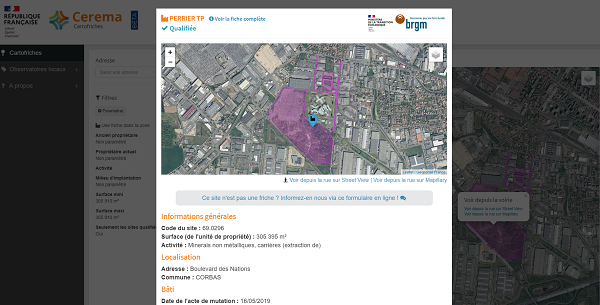 One solution to limit urban sprawl is to develop projects on former industrial or other abandoned sites. Cartofriches, developed by Cerema for the French Ministry for the Ecological Transition, displays a national map of brownfield sites, and serves as a decision-making tool.

It is intended to be enriched with national data for a preliminary listing of potential field sites, as well as – and primarily – though local knowledge (local inventories and observatories, studies…).

The beta version currently online uses data from BASIAS (the database of former industrial and service sites) and BASOL (a database of potentially polluted sites and soils that require government action) as well as from three local observatories (those belonging to the Marne and Ardennes Departments, as well as the Grand Amiénois Planning and Development Agency).

The app will evolve in line with user feedback

The app is currently in the testing phase, and Cerema is asking for user feedback (to improve data quality, add new data, improve the UI and features…), and is offering partnerships with local authorities and organisations who would like to use and assist the development of CartoFriches.

The test version contains 1200 confirmed brownfield sites from local observatories and national databases, which have been verified by photographic analysis, with new sites being added once information about eligible sites becomes available.

The brownfield sites are displayed according to the source of the data, and can be fleshed out with data on their location, buildings, owners, soil characteristics, and the urban area in which they are found.

Users can filter their search by parameters like the type of business and urban environment.

Get the beta version online:

Cartofriches data can be used to develop consulting tools and support local authorities and project owners who want to reuse brownfield sites.

The ultimate aim is to enable users to add data to the platform in real-time.