For the inclusive 2024 Olympic and Paralympic Games: Cerema working on accessibility of routes between railway stations and amenities

In 2020, the prefect of the Ile-de-France assigned Cerema a mission concerning the accessibility of pedestrian routes, to guarantee continuity of movement between railway stations and sports amenities by 2024. Review of the first lessons learned from assessments carried out on three sites: Paris (Porte de Versailles), Saint-Denis and Saint-Quentin-en-Yvelines.

France, led by the City of Paris, has been selected to host the 2024 edition of the Olympic and Paralympic Games.

The ambitions of the Paris 2024 organising team go well beyond organisation of this event. In the environmental as well as the social sphere, the aim is for the 2024 Games to be an occasion for innovation and for them to have a lasting positive impact on the host country and cities. This focus on “legacy” is therefore expressed through strong ambitions: to control the carbon impact, increase participation in sport, take action for inclusion, strengthen regional momentum, create employment opportunities and make them durable, etc.

In particular, this will be the first time in history that the Paralympic Games and the issues of inclusion will be given such a high profile, both in the communication aspects (identical logos for the Olympic (OG) and Paralympic (PG) Games, portraits of Paralympic athletes prominently displayed on the Paris 2024 site, organising committee of the Games), and in the organisation of the events and the layout of the Olympic sites (identical sports venues for the OG and PG, accessible to all, by public transport in particular). To achieve this last ambition of maximising use of public transport in transport services, it is necessary to devote particular attention to the “last mile”.

To reach this goal of truly inclusive Games, there has to be a strong focus on the question of universal accessibility.

Cerema, contributing to inclusive Games under the leadership and auspices of the Ile-de-France prefecture

It is in this context that the Ile-de-France prefecture commissioned Cerema to provide its accessibility expertise, more specifically on the question of the “last mile”.

Outside the Games, in a context where the framework law on mobility (LOM) strengthens requirements for accessibility at the most important public transport stops, the Ile-de-France prefecture wishes to accelerate improvement of accessibility of pedestrian routes around the region’s railway stations and structuring amenities.

So the objective of Cerema’s mission is to carry out an inventory of the accessibility of pedestrian routes between certain Olympic sites and the main transport stations used to reach them. The aim is to make recommendations in order to guarantee effective accessibility of these routes by 2024, for the Games, but above all to improve accessibility on a daily basis.

The ambition goes beyond the event and the relevant areas. The aim is also to increase dissemination of best practice on a national level by targeting all of the relevant local authorities, whether they are hosting an Olympic event, are simply the managers of a facility where major events are taking place or manage a transport hub generating journeys (e.g. major railway station, multi-modal transfer hub).

Three pilot sites in Ile-de-France, chosen because they complement each other 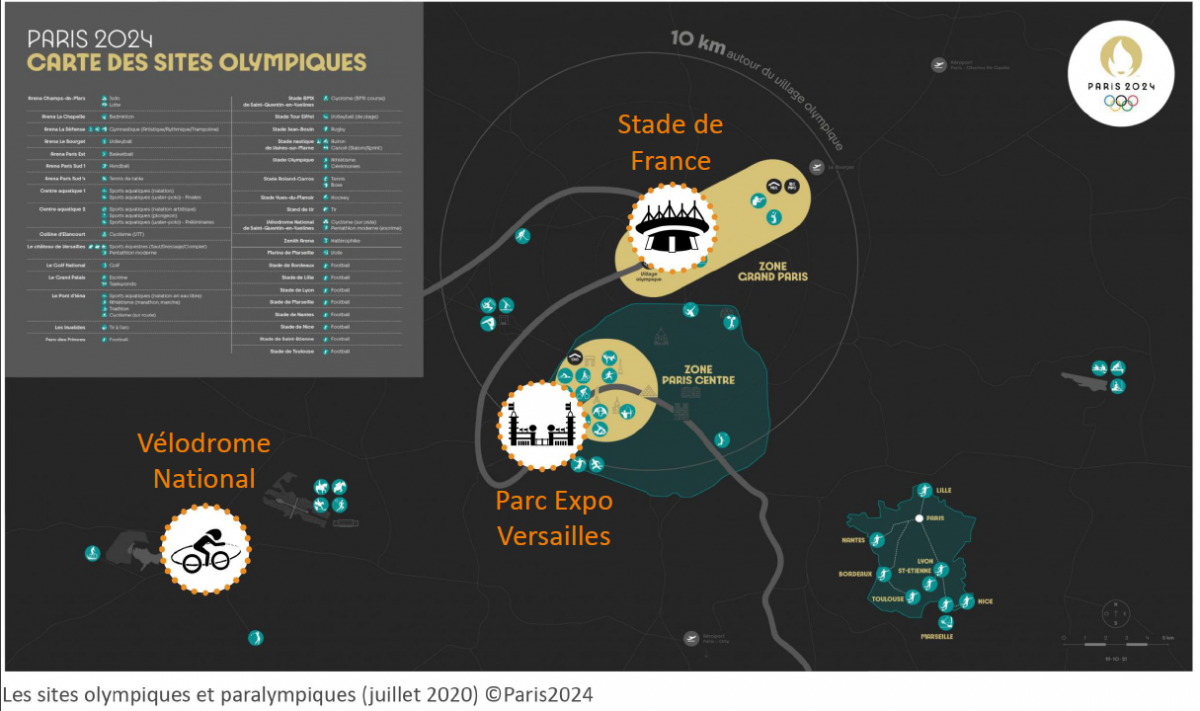 The three pilot sites were chosen because of the diversity of the situations they cover:

The three sites chosen also gave the Cerema teams an opportunity to deal with different governance situations, in a context where the “roads and public spaces” area of competence is sometimes shared between several players. It is difficult to succeed in meeting all the accessibility requirements and maintain a high quality of use over a long period of time. The three assessments highlighted the aspects that could be improved.

However Cerema did underline one positive point in common: all the local authorities had already considered the issue of making their public spaces more accessible and had carried out works in order to do so. So the Cerema teams were able to meet managers who were aware of the subject of accessibility and in favour of improving it. 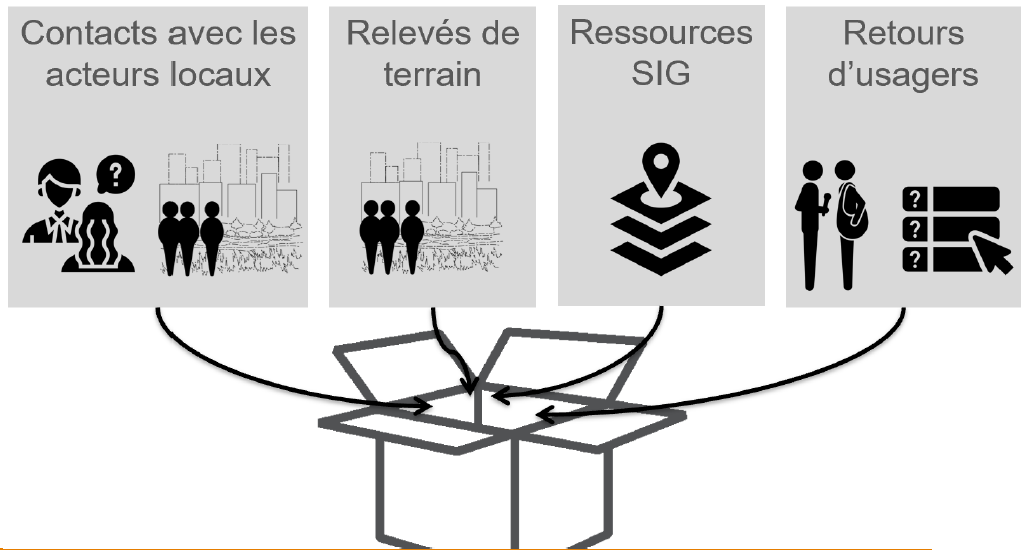 This mission gave Cerema the opportunity to deploy a multi-faceted methodology, combining interviews with managers and hands-on fieldwork, as well as meetings with users who had disabilities.

These people with reduced mobility were willing to carry out commented journeys, and so they represented a valuable resource for the Cerema teams, revealing the dysfunctions of public spaces at many different levels, sometimes imperceptible to a person without any disability.

Besides the reassuring interviews with road managers, the field assessment highlighted the fact that when you are trying to improve the accessibility of public spaces it is very difficult to take account of all the disability families, and more broadly all the users.

Public spaces are by their nature areas that people use in different ways, where they mix and meet up. The necessary compromises are sometimes difficult to find.

Accordingly a major issue identified by the field assessments was detection and safe use of pedestrian crossings The presence of warning strips was observed very often in the field, but this is not sufficient if they are not properly maintained and replaced. One of the blind volunteers clearly demonstrated this to us, stopping right next to the traffic on several occasions.

In addition to the issue with pedestrian crossings, the perception of pedestrian spaces and their continuity also raises questions. On which segment of the route am I safe? When will I be in the same area as other users who potentially may represent a hazard for me? (cars, motorbikes, as well as bicycles and scooters).

Indirectly the question of urban legibility is at stake here. In other words, how easily do users find their way around an urban structure and understand how it functions, or not?

The co-existence of pedestrians and cyclists was one of the main problems encountered in the field. Re-balancing and allocation of roads to active mobility modes is still rather timid. Because road traffic continues to be present in very large volumes, in some cases pedestrians and cyclists are required to share the same space, in conditions which are not always optimal.

When this mixing takes place in a relatively narrow space, and there is no clear identification and detection of the areas set aside for cyclists and pedestrians, the situation proves to be uncomfortable for both. For the most vulnerable pedestrians this can even be a source of anxiety.

The last important lesson learned is the importance of high quality signage. To produce signage that is identifiable, clear and can be understood by all, which remains aesthetically pleasing and gives enough information is a difficult challenge.

Nevertheless it is essential in order to give the right guidance to pedestrians, when they exit their mode of transport and also throughout their journey. Vulnerable people in particular have a strong need to be reassured that they are still on the right route. These people become tired more easily (intense concentration for cognitive and sensory deficiencies, tiredness for motor deficiencies especially those linked to age), and cannot take the risk of losing their way.

Following this work in the field, it is now time to formulate recommendations that will help not only the three local authorities that benefited from these assessments, but also all the local authorities working to make their public spaces accessible.